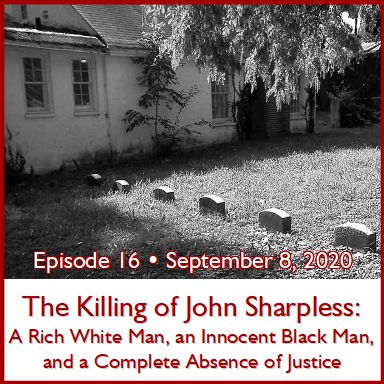 🔊 You can also subscribe to Stephanie Hoover Has That Story on: Apple Podcasts • Spotify • Google Podcasts • iHeartRADIO (or your favorite podcatcher.)

The Killing of John Sharpless


This is the story of the killing of John Sharpless. It's the story of a rich white man and the black man (Samuel Johnson) unjustly accused of causing his death. It's a story of money and murder... corruption, and a criminal justice system sorely lacking in justice. It's a case that could have happened yesterday. But, it didn't. It happened 135 years ago.

This episode is excerpted from Stephanie's book, The Killing of John Sharpless: The Pursuit of Justice in Delaware County (History Press, 2013.) For more information on the book, visit this page.

The following sound effects and music (or pieces thereof) were used in this episode:
• Heavy Rain and Wind from SpaceJoe
• Mournful.mp3 from SoundFlakes
• Train Locomotive from Matislav
• Light Footsteps from Kupp2
• RoofHammering03 from WIM
• Door Knocking (Angry) from Macif
All can be found at FreeSound.org.