The Surprising History of Body Snatching 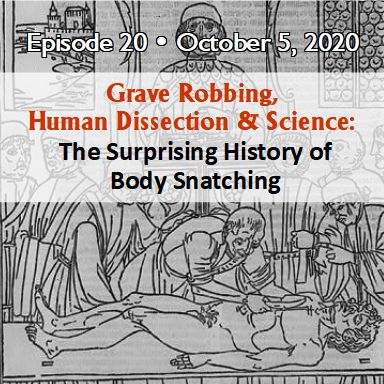 🔊 You can also subscribe to Stephanie Hoover Has That Story on: Amazon • Apple Podcasts • Spotify • Google Podcasts • iHeartRADIO (or your favorite podcatcher.)

The Surprising History of Body Snatching


Dissection of the human body dates back to the time of the ancient Egyptians. But this form of medical study was not common practice in the U.S. until the 1740s when the University of Pennsylvania taught America's first formal anatomy course. While this ushered in the era of modern medical education, it also created a grim reality: the suddenly expanding need for cadavers outpaced the supply source. How would this rapidly dwindling supply of dead bodies be replenished…?

In this episode, Stephanie discusses the surprising history of body snatching and how modern medicine relied on it.

To read Stephanie's feature article, on which this episode is based, visit this page.

To share your comments on this episode, send Stephanie a message. Or, join the conversation in one of her new Facebook groups: